What To Consider When Planning A Kitchen Island Unit

Island units are one of the most sought after features in a new kitchen, with most people choosing to have one if they have the space. So we share some tips if you are looking to incorporate an island unit in your new kitchen...and some wonderful island unit inspiration too.

If you are planning a kitchen and need some help finding a local kitchen showroom, we can match you with the most suitable ones for your project.

How much room should I leave around my island unit?

The "clearance zone" is the space between the island unit and the run of units which is recommended to be at least 80cm, giving one person enough room to prepare food at the island unit. If you have a busy kitchen then you would be looking for ideally 1 metre space, this would leave plenty of room for two people standing back to back. You must also consider the proportions of the room and the depth of the doors on either side too. Beautiful island unit which is practical too by Ktchns Ltd

What size works best for an island unit?

Don't try and squeeze an island unit into a small space just because you want one - it won't look right and it will make your kitchen feel very cramped.

The smallest size of an island unit is about 90cm deep which would include a cabinet of 60cm deep plus an overhang of 30cm, this means you can comfortably sit at the island unit and get your knees underneath. The smallest width without looking too small is 120cm, that way you can have a double cupboard making it practical too. What works in terms of layout for an island unit?

Most kitchens with islands will have a galley style of layout where they have the sink on one side and the cooker on the other. The galley kitchen layout is popular as it's easy to work in the kitchen with everything in close proximity, making it far more efficient. Another popular layout is the l-shape which often keeps the island free of appliances as there is plenty of worktop space elsewhere in the kitchen.

The biggest hazard in an island unit is an obstacle in the way that is easy to trip over, so items such as dishwashers are best kept away from the island unit if possible.

In terms of positioning in the room, it really depends on the layout of your space. Many people like the island unit to face out into the living area, which is far more sociable when you are prepping food. Should I have the hob or sink on my island unit?

If you are choosing a modern induction hob in your new kitchen, then it's really popular to have the hob on your island with the sink on the cabinets behind the island unit. Downdraft extractor fans are a great choice next to the induction hob as they sit on the surface seamlessly and pop up when you are using them. Downdrafts are also a great option if you have a roof lantern above your island and can't install an extractor fan.

For those choosing a range cooker in a more traditional kitchen, then the island unit can be used for the sink. We also see some wonderful island units that are kept free of both hobs and sinks...this keeps the island completely clear and perfect if you have a large kitchen and have room for the other appliances elsewhere. We love how this island unit has been kept free of any appliances - the freestanding look works beautifully in this shaker kitchen. Kitchen by Brayer Design.

What other appliances are popular on the island unit?

A popular choice is to have a hot tap on the island separate to the standard taps, this is a great idea if you have young children as it avoids any accidents. The hot tap is often kept with the prep sink too, which again is handy for prepping food and a good option if you have the induction hob on your island.

Wine coolers are also so popular on the island and can look really smart, especially if you have a large island unit which has plenty of room. Finally, pop up sockets are a popular choice on the island, rather than having unsightly plugs at the end of the island unit. What shape of kitchen island is popular?

Square and rectangular islands are the most popular shapes with three or four bar stools in a row, or consider an l-shape where an additional stool can be placed around it.

But there are so many wonderful ideas for island units which can make yours look a bit different. We have seen "floating island" where the island is built to appear like it's floating in the kitchen, giving the illusion of more floor space. A popular choice for families is to have a dining area which meets the island, either as a continuation or sitting at a right angle. If you have a large island unit then you may not be able to have a worktop without a join in it, with many people preferring the island unit to smooth. An option is to mix materials such as quartz and oak, where using oak can really add some warmth to the kitchen. Or you can choose a material such as concrete or corian which won't have a join. Mixed worktops in this island by Craigie Woodworks

What are the lighting options for a kitchen island?

Pendant lights are so popular over island units and add so much style to the kitchen. Think about the size of the pendant lights and make sure they are not too big and you can clearly see under them. Don't over-clutter the space and don't put them next to an extractor fan either.

LED strips under the worktops are a popular choice in a contemporary kitchen and look lovely in the evening in an open plan kitchen. What if I can't quite fit in an island unit?

Moveable island units are a great idea if you would really like an island but need the free space from time to time. They also look good in smaller sizes, such as a butchers block which you can keep against a wall but move into the middle of the kitchen when you need the additional space to prepare food. Island unit against a wall from Zara Kitchen Design

If you are planning a kitchen and need some help finding a local kitchen showroom, we can match you with the most suitable ones for your project. 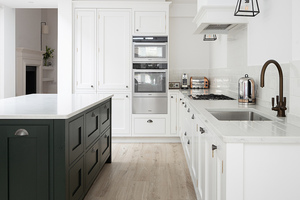 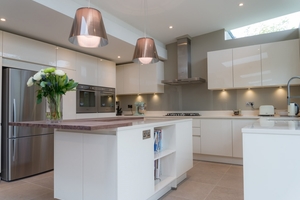 How Much Does A Kitchen Extension Cost In 2022