There is so much choice for walk in showers. For the tray, choose as slim as possible to integrate the shower seamlessly, or else tile the floor in a wetroom style.

There are also loads of options for the screen too - either choose a single shower screen, a tiled partition wall or go for an enclosed look.

The options are endless and we have picked some amazing pictures to give you some walk in shower ideas....from the small loft en-suite to the ultra modern crittall shower screen, they are all stunning!

You can create a wetroom feel with a flush shower tray, without having to worry about waterproofing the floor as you would with a wetroom. We love this walk in shower idea from Oak Apple Decor, where the grey shower tray is flush with the tiled floor and makes a great feature in the room too.

We love the individuality of this bathroom, with the crittall shower screen, the amazing floor tiles and the rustic pink wall finish...there's also a copper bath peeking in the corner! It's such a stylish space and demonstrates how you can make a narrow shower space feel roomy, with bags of personality too. 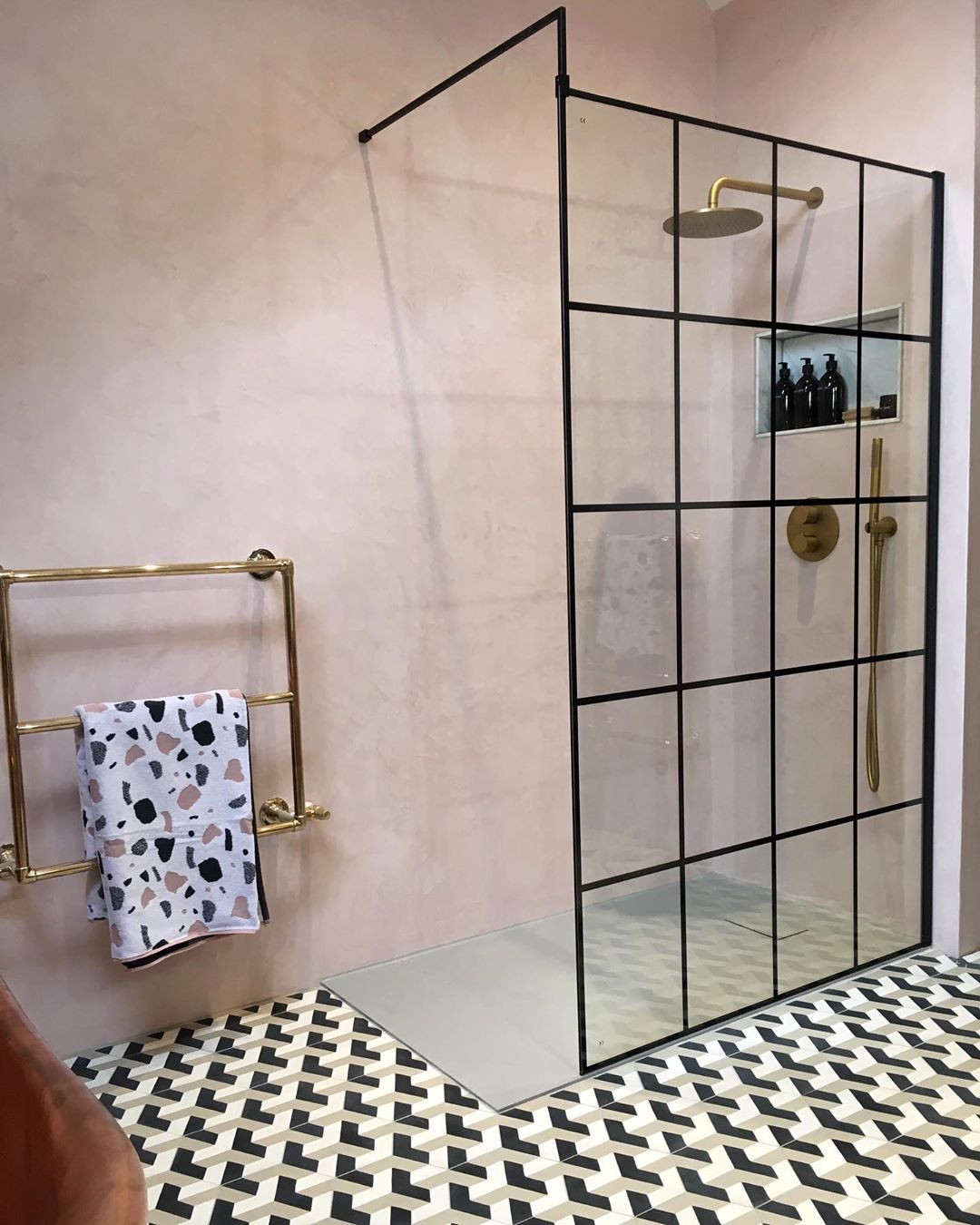 2. Use a wall rather than a shower screen

We love the Victorian features in this shower room with the fabulous penny tiles and traditional radiator.

The partition wall is a great way to separate the shower and is far easier to clean than a shower screen! The walk in shower has been kept door-less which keeps the room fuss free. If you are choosing not to have a door, make sure the shower is set far enough back so you don't end up with water all over the bathroom floor.

We also love the peny tiles on the floor - the black grout is a very low maintenance option if you would like tiles on the shower floor instead of a tray. 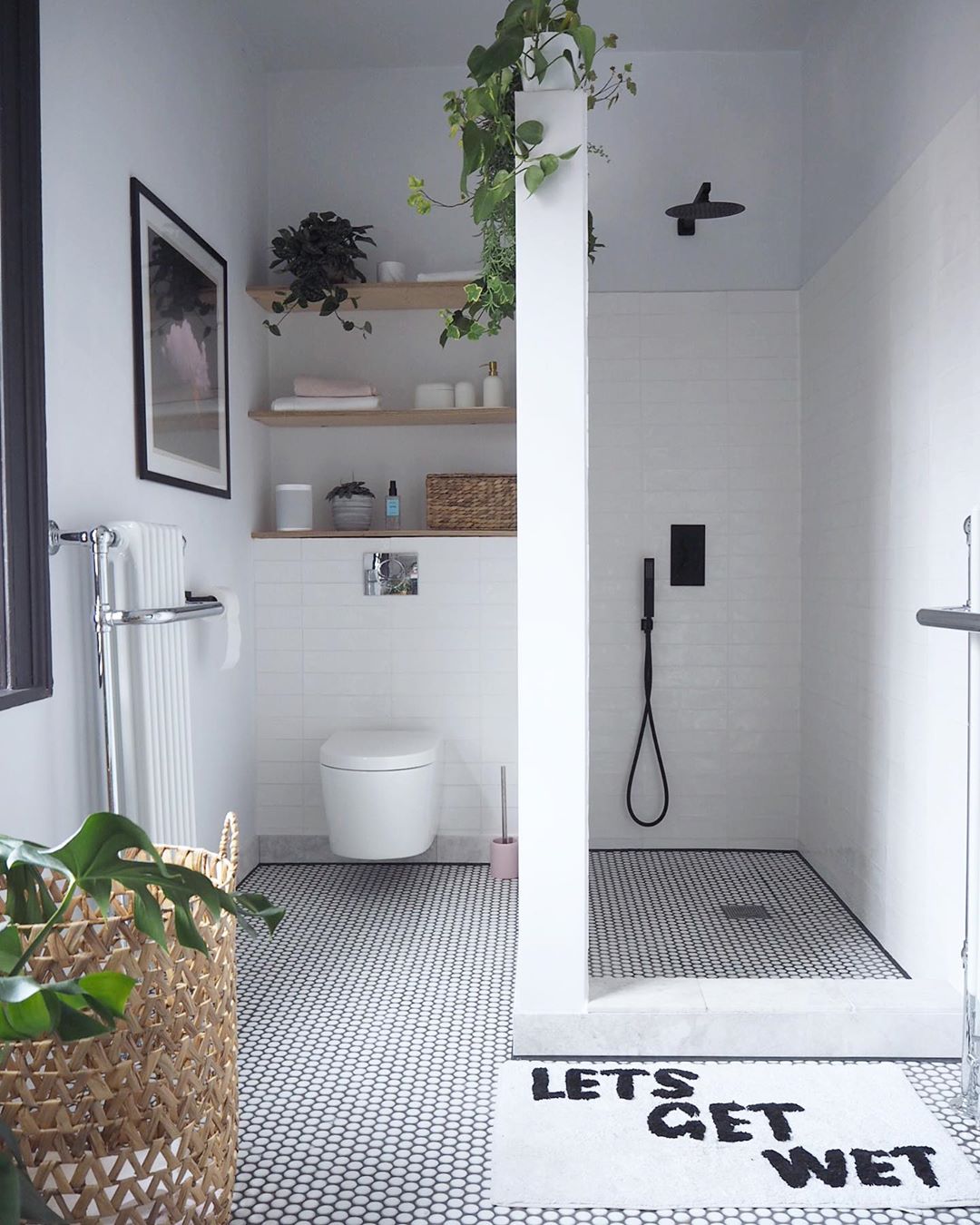 3. Add a little step to make a feature of the walk in shower

There is a wonderful simplicity about this bathroom which just makes it the most relaxing space. The white tiles and pale oak flooring keep the space looking so tranquil, with the gorgeous blue shower tiles standing out and making the shower a real feature. Small tiles on the floor are a great walk in shower idea as they allow more grip...they also can cover a slight slope on the floor effectively.

The small step gives the walk in shower a little definition from the rest of the bathroom too. A step to a walk in shower can also be a good cover up for awkward plumbing, rather than having to move the pipework which can be costly. Consider a large step with an area to the front of the walk in shower to conceal the pipes whilst creating a lovely feature. 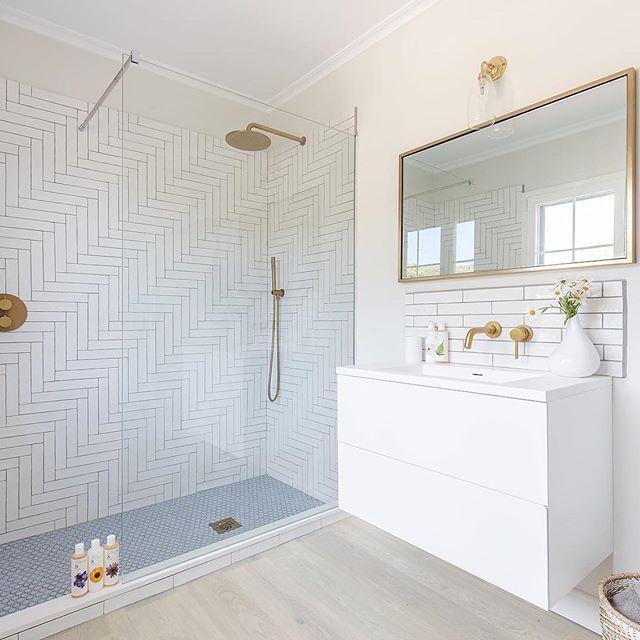 How fabulous are these tiles in this walk in shower - we are in love with them! The contrast of the dark tile, the white walls and the panelling is striking.

This walk in shower is enclosed by the glass screens to prevent the water splashing onto the wooden floor, however there is no awkward door. These shower screens are also perfect in a smaller bathroom where you might not have the space for a door opening.

We love the individuality of this shower room...and how cosy would that rug feel on a winters morning?! 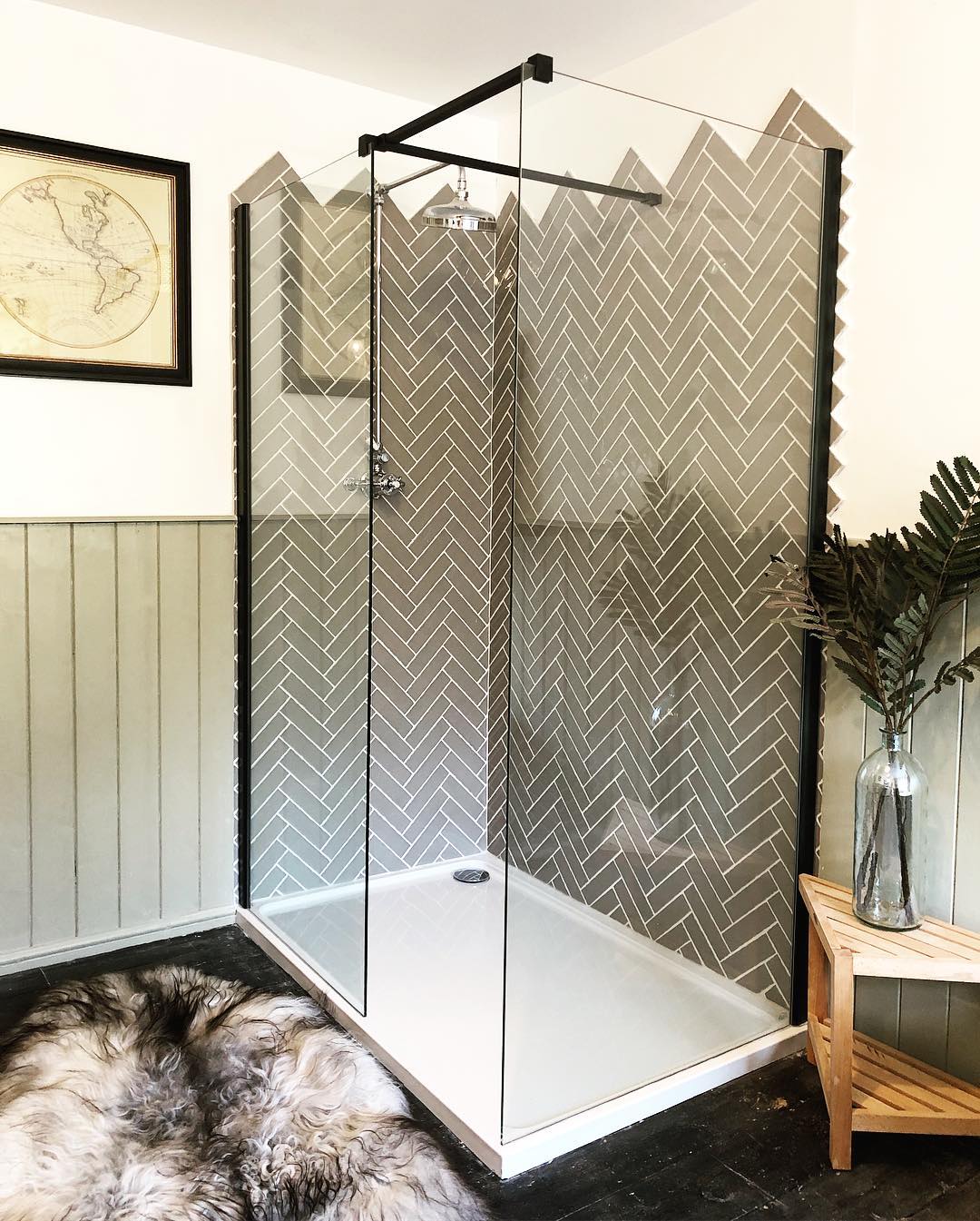 5. Go for a large glamorous space

Don't try to squeeze too much into your bathroom, consider a wide walk in shower instead of a bath with a shower...it looks far more luxurious and will give your bathroom the look of a spa!

We think this is the perfect en-suite for a master bedroom from the home of Insta account @renovating_sandylea. The huge walk in shower has so much space and the gold taps look so smart against the deep blue herringbone tiles. The unframed shower screen adds to the simplicity of the walk in shower too. 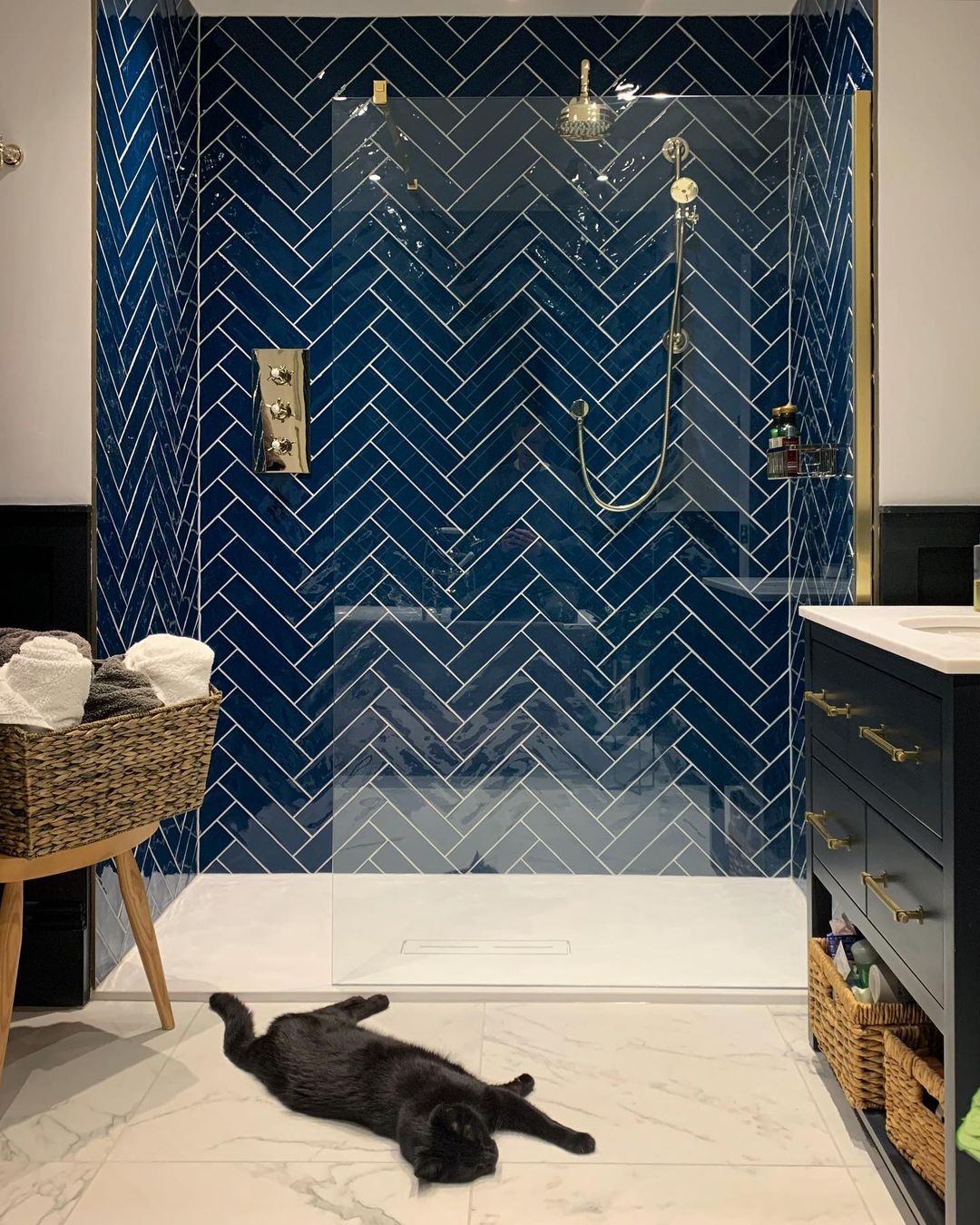 Check out our 5 Favourite Walk In Shower Trays for more ideas and inspiration.

We love the fun, encaustic style of tiles in this walk in shower, which work so well set against the large neutral tiles. These are a great idea if you want something a little different but don't want to go for a strong colour in your bathroom.

This walk in shower looks so bright, with clever lighting in the shelving and light coloured tiles used throughout. The simple glass shower partition also adds to the light and spacious feel of this walk in shower. 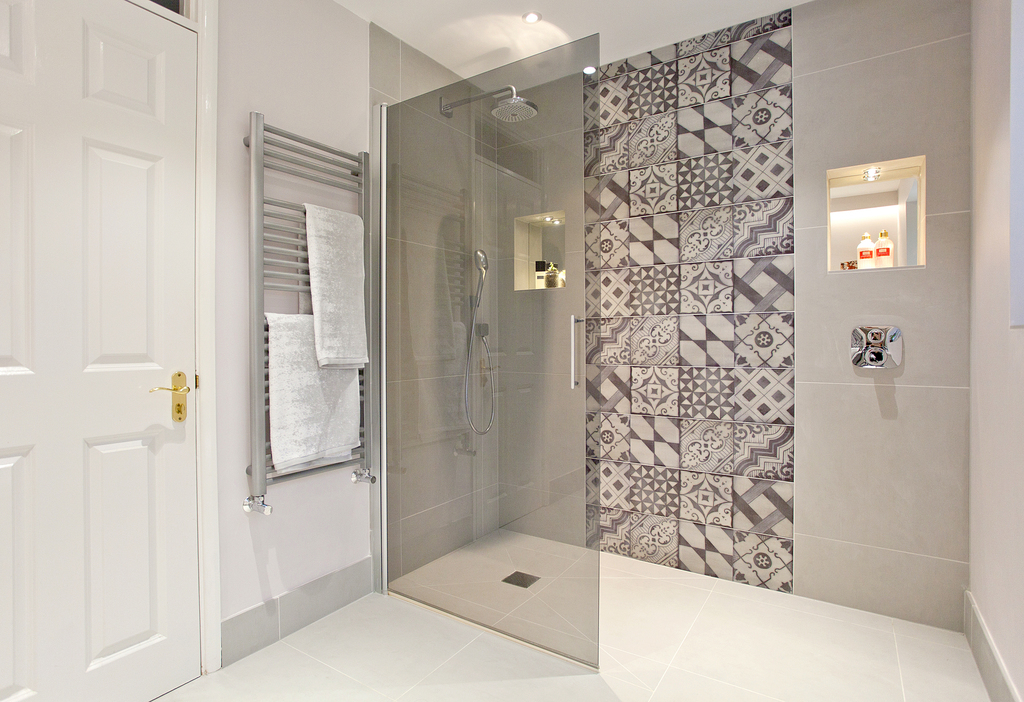 Walk in shower by Instil Design

7. Keep it really simple in a small space

This shower room from renovating_the_house on Instagram, is a great walk in shower idea for a small bathroom. The best thing about walk in showers is they can fit any size of space, you don't need to be restricted by an shower enclosure.

The shower is door-less which keeps the room feeling open, where a door would have made the shower feeling closed in. The shower is cleverly set under the roof space, using every inch of this small en-suite.

The stunning marble effect tiles are the same on the floor and the walls which again gives the feeling of space. We love the black finishes which add to the style, giving this room an industrial edge. 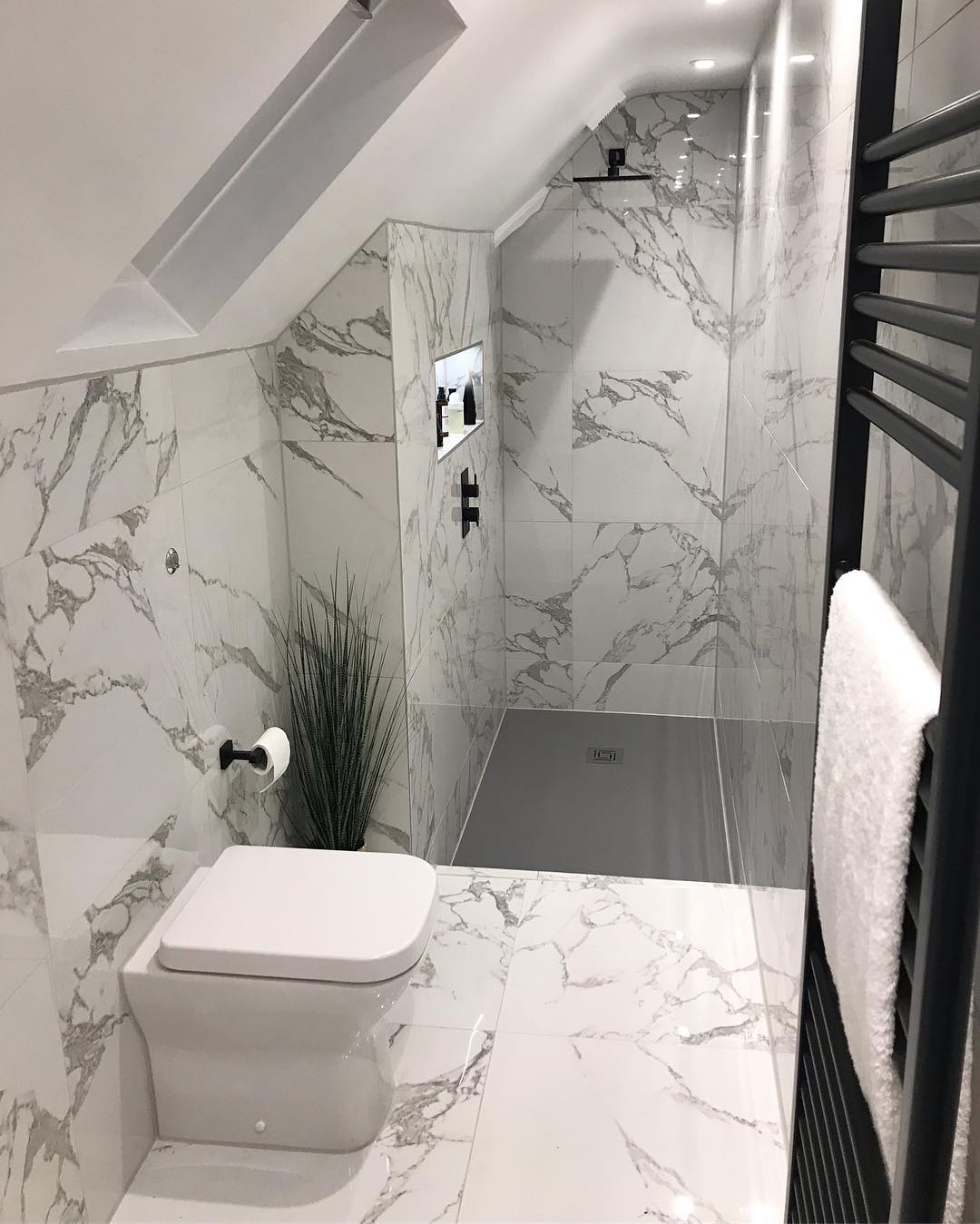 8. Think outside the box when it comes to the layout

We have seen a few bathrooms with a layout similar to this one by Life At The Forge...it's such a wonderful idea if you have a fairly narrow space but still want a separate walk in shower and bath.

The raised level zones off the walk in shower and bath, whilst the wetroom style of shower next to the bath works so well and keeps the room feeling open and spacious. We love the natural, earthy tones used here and the brass showerhead and taps just finish is off beautifully. 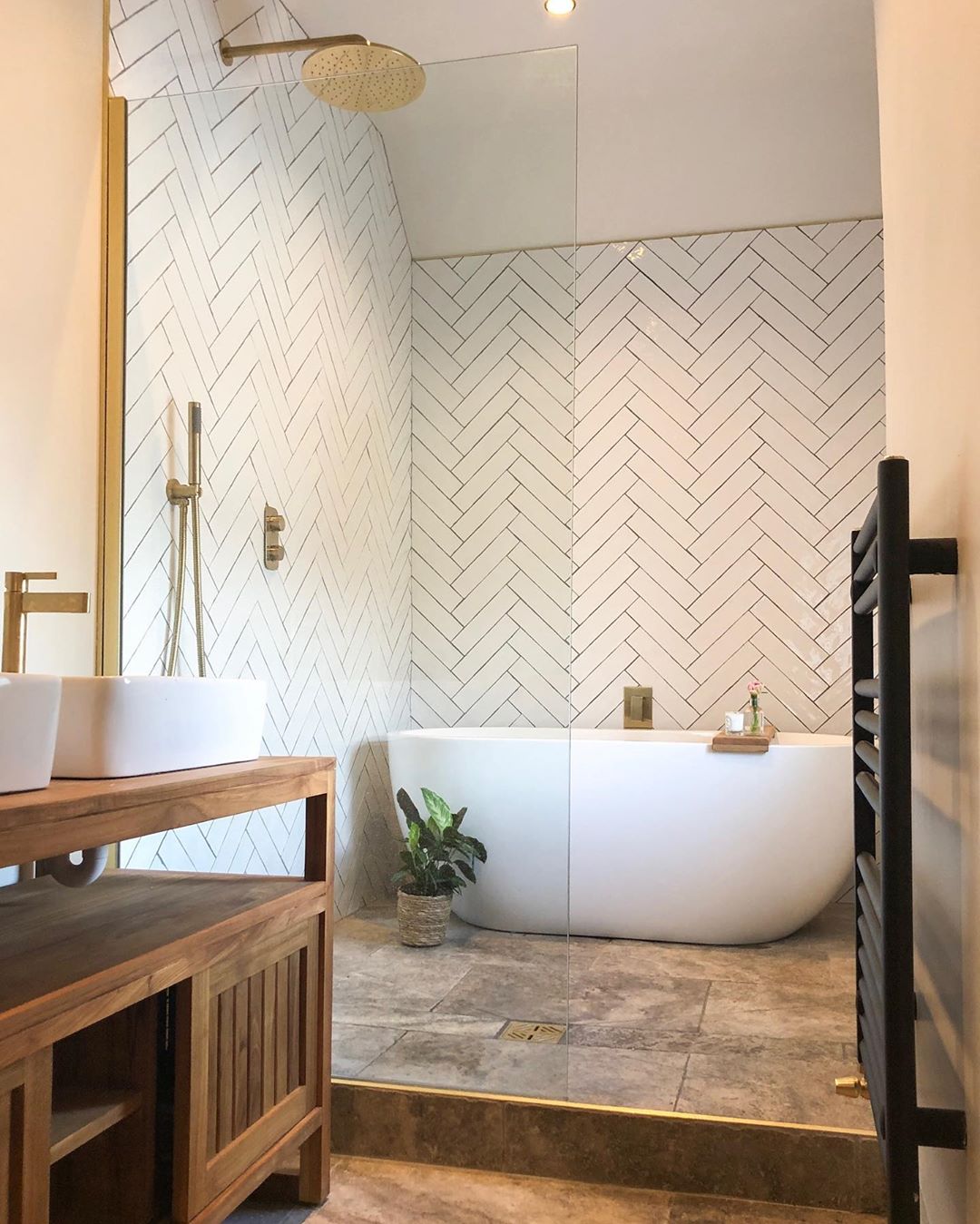 9. Use the same tiles throughout for a seamless look


We adore this walk in shower in the home of Insta account @abrawynn.

By working with the slopes in this bathroom, every inch of space has been used so well. A simple shower screen separates the walk in shower from the stylish freestanding bath.

The tiles on the shower floor continue onto the walls and around the bath area, creating a statement whilst also keeping a seamless look. We think it's just gorgeous! 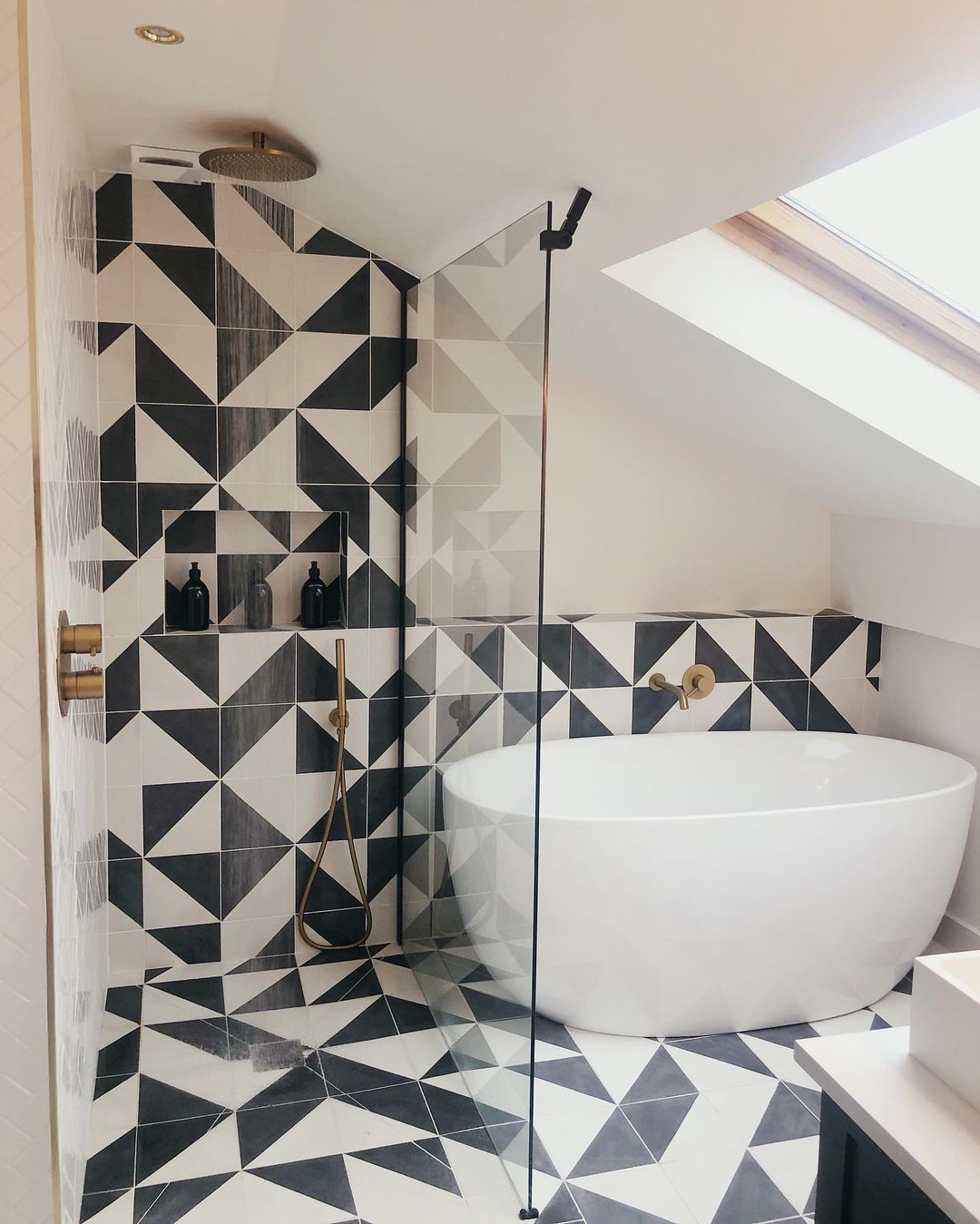 Walk in shower in the home of Insta account @abrawynn

Here are some more of our tips when creating a walk in shower: 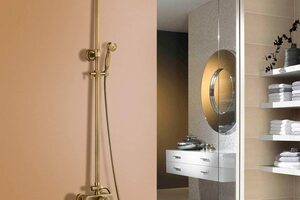 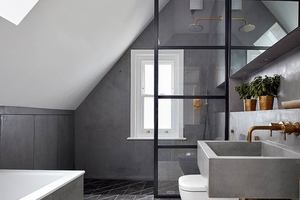 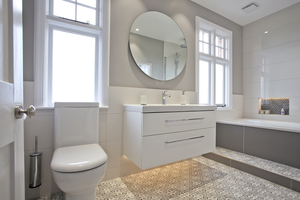